Posted on September 27, 2011 by edwarddaniell

It is very unusual to see old boats in this new marina – but MMS now has the privilege of looking after not only the oldest, but one with quite a seafaring history.

The vessel is a US Navy 63’ Aircraft Rescue Boat built by the Miami Shipbuilding Corporation in 1943.  She was one of 34 built by this yard and the design was based on the British Marine Torpedo Boat ( MTB) that had a top speed of 48 knots.

Aircraft Rescue Boats carried a crew of fourteen in total – a skipper, the coxswain, assistant coxswain, deckhands, fitters and also a medical orderly.  It is estimated that some 25.000 lives were saved worldwide by these vessels. 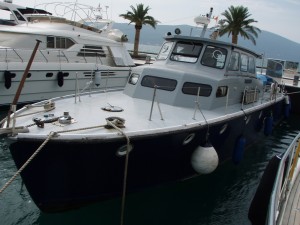 The boat, now called ‘Canonero’, was bought by Dr. Paul Clarke ten years ago, from a Dutch owner over the internet. After a very fraught voyage across the North Sea, during which both engines packed up, it was moored for five years off a small island near Windsor whilst Paul fitted it out and converted her into a liveable ship. His wife complains that she rarely saw him during this time as all his energy was devoted to his new project. 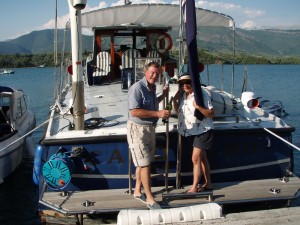 The result is a remarkable achievement:  though the engines are not original, they are two Scania  Vabis Diesels built in 1949, giving 170HP with considerable torque.  The hull is a double skin of Iroko wood, which originally had canvas between the diagonal layers of timber.  This type of construction provided a light and flexible hull but, of course, it’s difficult to maintain.

My main job this winter is to ensure the bilge pumps are operating properly – but it also gives me a chance to step back into the past every time I go on board.  Nostalgic indeed!